Gathered Around the Cross

Gathered Around the Cross

My sermon began musing about whether or not Pilate had a throne. Technically, Pilate served as a governor in the Roman Empire. But Herod, who had a similar role, would call himself a king. Kings have thrones, which serve as in important symbol of their power. Caesar probably had a throne, back in Rome. Thrones remain in the throne room and they do not move. People come and gather around the king and his throne. They bring gifts, they make requests, they pledge loyalty both to the king and to the one who sits in the throne.

We have a large beautiful stained glass cross behind the altar of our worship space and when we come and worship we gather around this cross. We also have a processional cross that we can move about and gather around wherever we might be. When we worship in our fellowship hall, we often move this cross downstairs to that space. If we held a worship at Gypsy Hill Park, we could take our cross there. We could even take our cross to Thousand Oaks, California, and hold worship their in the midst of the charred landscape of the recent wild fires. We could do that, but we also can realize they already have a cross out at Thousand Oaks, which is home to California Lutheran University. The Lutherans have a presence in the midst of these fires and the facilities of California Lutheran University served as temporary shelter for people displaced by the fires.

[From this introduction I transitioned to a side trip that my family took while in California over the Thanksgiving Holiday. I have rewritten this section to include in a VA Synod Newsletter and include the revised portion below rather than my original sermon copy. I have also included some pictures.]

The McCarty family spent Thanksgiving with Elizabeth’s brother who lives in West Hollywood, California. And because Jamison’s dream school is on the beach, we drove north on CA Highway 101 to check out University of California at Santa Barbara. CA 101 goes right through Thousand Oaks, home to California Lutheran University and one set of the wild fires that burned earlier this month (November). Nothing was burning Tuesday before Thanksgiving. We saw no smoke nor anything smoldering, but we saw scarred remnants of trees and brownish black burnt ground. 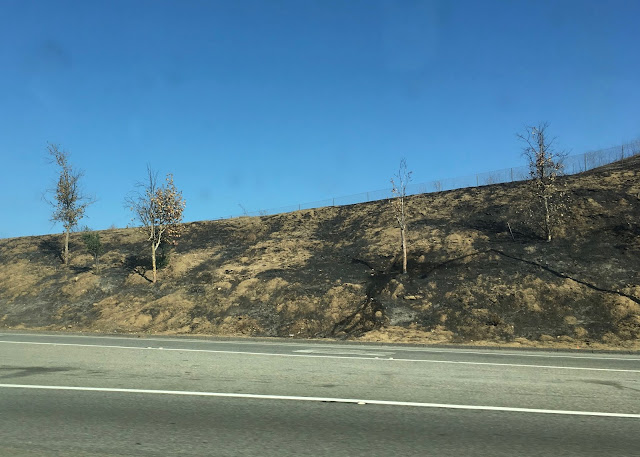 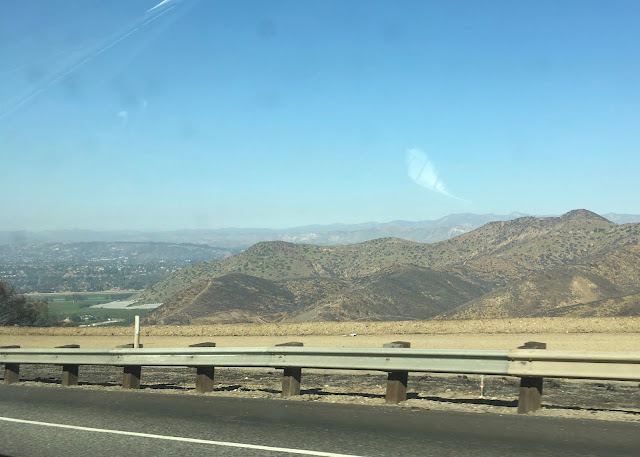 Outside of these visuals, life seemed to move along at a normal pace. Sun shined bright in the vivid blue sky. The highway gave us full use of all the lanes. We stopped at a Burger King in Camarillo California at that wonderful 30 minute time when they served both breakfast and lunch. They seemed to have a full menu. 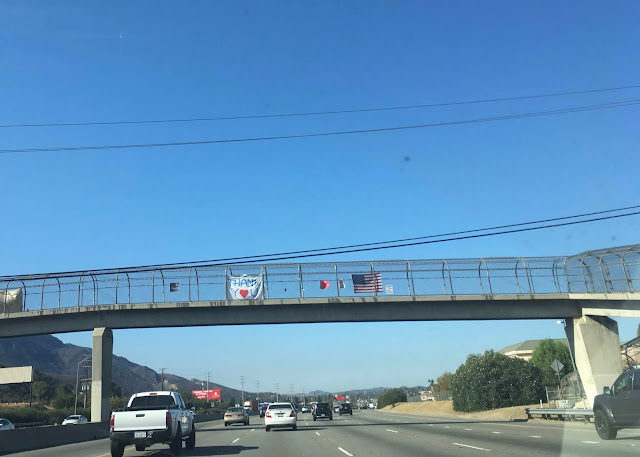 I took these pictures while riding along--in the passenger seat in case you were wondering. (I wasn’t driving and taking pictures at the same time.) I quickly snapped a picture of Thank You messages on an overpass, including one where the artist replaced the O in “You” with a big red heart. A timely reminder that in times of stress and tragedy, people find ways and take the time to say “Thank You.”—to first responders, to those who show compassion and to God the Creator. Also, in these times, the efforts of a few to say thank you often speak for the whole community. (After mentioning this sign during my Sunday morning sermon, I would see it that afternoon in a television commercial during the Steelers game.)
Through all of this, the Lutherans have had an active and caring presence through one of our ELCA colleges. California Lutheran University. Their facilities provided shelter to people displaced from their homes by the fires. Also, you may remember at the beginning of the month, a mass shooting took place at a nearby dance club. The counseling psychological services at CLU made available a helpful handout “When People Don’t Get it” for those coping with either of these tragedies. The handout helps identify the stresses of coping and the importance in caring for yourself. The advice offers wisdom to people in a variety of circumstances and reminds all who read it, “You are valuable and important.”

Amen
Posted by Celtic Lutheran at 8:57 AM No comments: